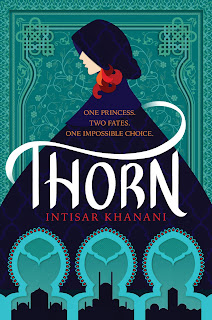 Title: Thorn
Series: A standalone in the “Dauntless Path” world
Author: Intisar KhananiCover Designer: Jenny Zemanek
Genre: Young Adult Fantasy
Release Date: March 24, 2020
Publisher: HarperTeen
Price: US $18.99 (Hardcover), US $9.99 (e-book)
A princess with two futures. A destiny all her own.  Between her cruel family and the contempt she faces at court, Princess Alyrra has always longed to escape the confines of her royal life. But when she’s betrothed to the powerful prince Kestrin, Alyrra embarks on a journey to his land with little hope for a better future. When a mysterious and terrifying sorceress robs Alyrra of both her identity and her role as princess, Alyrra seizes the opportunity to start a new life for herself as a goose girl. But Alyrra soon finds that Kestrin is not what she expected. The more Alyrra learns of this new kingdom, the pain and suffering its people endure, as well as the danger facing Kestrin from the sorceress herself, the more she knows she can’t remain the goose girl forever. With the fate of the kingdom at stake, Alyrra is caught between two worlds and ultimately must decide who she is, and what she stands for.


“Princess Alyrra,” the king says. I rise and lift my eyes to his. He studies me as if I were a prize goat, his gaze sliding over me before returning to my face, as cold and calculating as a butcher.

“We have heard tell of you before.”

“My lord?” My voice is steady and calm, as I’ve learned to make it when I’m only half frightened. For all my prayers, there’s no sign of softer traits in the man before me.

“It is said you are honest. An unusual trait, it would seem.”

Dread curls tight in my belly. I force some semblance of a smile to my lips. There is no other answer I can give that my family will not despise me for. My brother has gone rigid, his hands pressed flat against his thighs.

“You are most kind,” my mother says, stepping forward.

The king watches me a moment longer, leaving my mother waiting. Just when I thought I might finally escape my history, how my family sees me, I find I am mistaken. There is no better future to hope for now. The king has come for me, knowing full well I am nothing to my family. 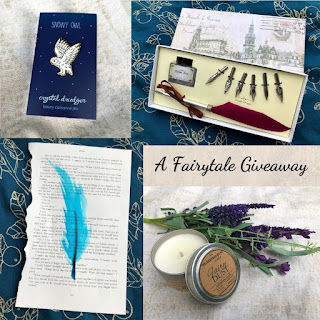 You could win a  THORN-inspired prize pack including a great snowy owl enamel pin, a gorgeous "quill" style calligraphy pen set, a hand-painted watercolor feather on a page from Thorn, and a "fairy dust" candle. The prize pack plus a $25 Gift Card will be awarded to one US winner, a $25 Gift Card to one non-US winner. 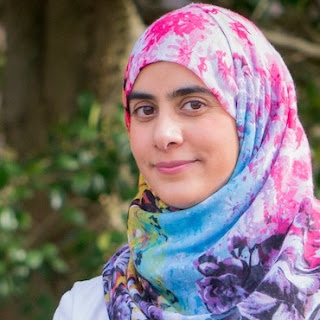 Intisar Khanani grew up a nomad and world traveler. She has lived in five different states as well as in Jeddah on the coast of the Red Sea. Until recently, Intisar wrote grants and developed projects to address community health with the Cincinnati Health Department, which was as close as she could get to saving the world. Now she focuses her time on her two passions: raising her family and writing fantasy. She is the author of The Sunbolt Chronicles and Thorn (HarperTeen 2020).
at July 08, 2019